Davina is the new vampire Queen, and she’ll be damned if her reign is defined by how much is spilled. But humans threaten her world. To protect those she loves will she need to stain her hands with blood once more, and risk unleashing darkness into the world?

Alexios still burns to have Davina all to himself but she’s his Queen and a dream still ever far from reach. He’ll do anything to protect her and her throne, including that which may cast him from her side forever. 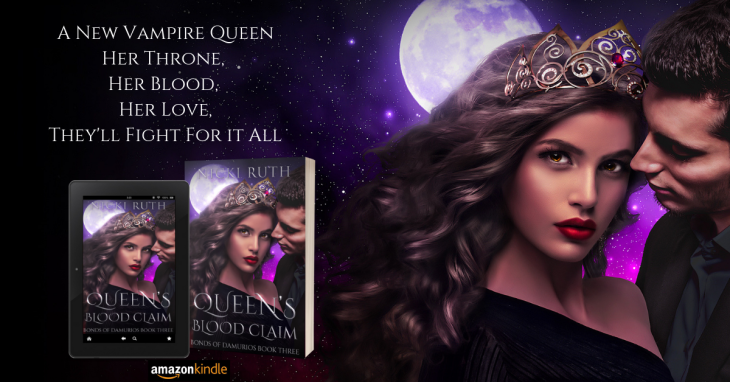 Queen’s Blood Claim continues Davina and Alexios’ journey. Davina is the new vampire Queen hoping to find her way in her new Queendom. But her mistakes come back to haunt her and begin to unravel the bond she has with her fiercest champion, Alexios.

Alexios still dreams for Davina to be his completely. But their enemies complicate their lives, and Davina doesn’t take to his ruthless way of solving their problems.

The royal divide between them keeps growing, will they overcome?

“Thank you again for your counsel, Lord Minister. I’ll think on your recommendations.” He bowed to her and turned on his heel, but not before sparing Alexios an irritated glance.

Alexios rose to greet Davina and saw the tension lining her face. “What was that about?”

She shook her head. “Just more babble from my overseers. I’m really getting tired of it. I think I’ll need to make some very unpopular changes around here if they insist on trying to have me shackled.”

“It comes with the territory. But let’s wait until we identify all who stand against you before we arm them with more ammunition.”

Davina narrowed her eyes. “I’m not waiting. They’re insufferable and forget themselves. I’m not ruled by them. They are ruled by me!”

“Yes, but things have changed since your mother’s time—”

“Alexios. They’re insisting I find a mate and continue my line.”

He froze. His heart lurched into his throat, and he stumbled as if the ground had given out underneath him. Down he fell; down a dark precipice from which he had no lifeline to hold on to.

It was his worst fears come true. Her nation wanted heirs, a royal family—one he couldn’t provide.